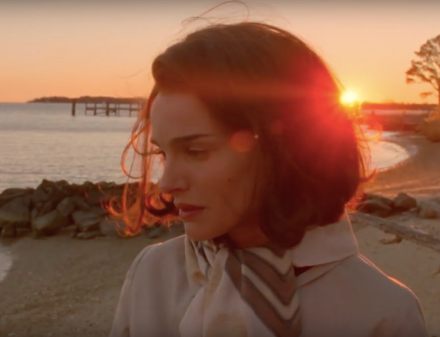 “I believe the characters we read on the page become more real than the men who stand beside us.”

I finally decided to drag myself out of my movie rut and see Jackie. Natalie Portman plays the title role in the days directly following her husbands assassination and how she helped shape and write his legacy- as well as her own.

For me this movie really lived with Natalie Portman’s performance. I love Emma Stone but probably it’s Portman I would have given the Oscar. I just think Stone’s La La Land character was more relatable- that’s a whole other story though. Honestly, the first couple of minutes I was unsure. The voice during the bits where she was giving the television interview- I didn’t think I could watch a whole movie.

But when the drama really kicks in- which is relatively quick. It’s there Portman excels.

From the pure trauma at the hospital and removing the clothes washing the blood off to the funeral preparations, telling her children, wandering around the living spaces of the White House in evening gowns while flashing back to happier times. I teared up several times.

But those things are also shot around Jackie giving an interview to a reporter played by Billy Crudup where she rears between the emotion bursting forth and a cold hard edge to be in control of the narrative and write this story. I actually loved those bits. The human aspects as she came to terms with it all.

It didn’t sanctify or vilify anyone. It was more about grief and legacy, loving and hating someone, history and mourning the things you didn’t get a chance to do along with the person.

The movie was beautifully shot and I loved the details of her clothes. As well as that of the White House. The score was appropriately haunting and there was a nice piece with John Hurt as a Priest Jackie confides in.

The only downside for me, besides the iffy beginning, was I wanted a bit more from her back and forth with Crudup’s character. I found that thread fascinating in terms of history, stories and the idea image making which is weird because I don’t even remember his characters name.