May has come and gone. It was mostly a good month. I seemed completely unable to keep my mind on anything longer than it takes to read a book (and I started probably a dozen that I put aside for later.)

My nephew visited for the Memorial Day weekend and I got to buy him books! Which was nice because usually he’s all about the toys 🙂

Work- which is usually slow this time of year very much hasn’t been. I don’t know if that’s good or bad yet. Also we’re already hitting triple digits here and I’m trying to find new and exciting ways to exercise without going outside or going to join a gym. But on to the important things…

I finished 16 books in May including 2 graphic novels

Very different but enjoyed them both. I don’t know if I enjoyed Captain Marvel enough to keep reading though. Might just wait for the film.

Also finished 1 series this month with:

So that’s the end of The Themis Files. All in all I thought the books wrapped up nicely but I still preferred the second in the series (Waking Gods). Thats where the whole thing really takes off with a lot of action and some nice tension and surprises.

It’s a good series for summer actually as all three are fast reads mostly in interview or recording format.

I even managed a book of poetry this month!

Ghosts Still Walking is in large part about Vietnam. This was a lovely heartfelt book. You could feel the pain and history in some of the work. This is my third book of poems this year and I think I prefer shorter poems to longer in all three books honestly but I have a couple more and some classics I’m going to dip into.

Top of the Books

Evelyn Hugo I’ve already talked about. I definitely see it as being on my top ten reads.

This Adventure Ends is my second Emma Mills and I feel like more people should read her- she doesn’t seem to get a lot of attention like some and I absolutely love her work. It’s another book that focuses on friendship as much as anything else. And this one deal with a father joining an on-line fandom! It was so cute 🙂 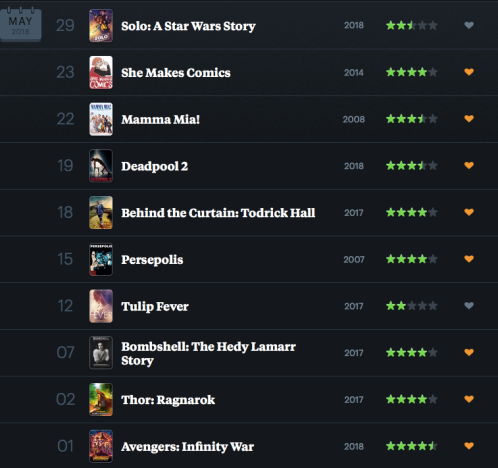 I saw 10 Films in May. Three rewatches with Infinity Wars, Ragnarok and Mamma Mia! Oh and I just realized Making Fun: The Story of Funko isn’t on here! So I guess 11.

Bombshell about Hedy Lamarr, Behind the Curtain: Todrick Hall & She Makes Comics are definitely the standouts of the month. 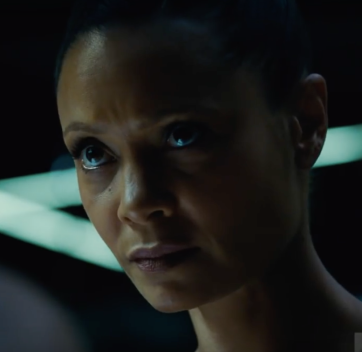 There’s been a bit of a thing about people’s reaction to Dolores this season and the “angry woman” character that I’m kind of split down the middle on. Will be interested to see how it goes the rest of the season and talk more about that.

But seriously if you’re behind and unspoiled CATCH UP!

Also some huge Walking Dead news was all over the place this week: major spoilers here. I’ve been kind of down on the show for a while now but always hoped it would bounce back. You can probably do the old proverbial put a fork in it because I don’t see how it bounces back from this one.

And now it’s June!!! And I can hopefully finish everything I start 🙂 Big releases include My Plain Jane and Neverworld Wake in terms of books and of course Incredibles 2 for films. I hope everyone has a wonderful month!