So the Avengers Endgame trailer dropped!

The movies really close for the first trailer but hell this movie could have probably gone without one. All in all I really liked it. I do mourn Cap’s beard and I have all kinds of questions and thoughts on this one.

Scott Lang shows up at the end of the trailer. When we left him in Ant-Man and the Wasp he was seemingly trapped in the Quantam Realm. But he gets himself out. Is Louis with him in the van? He also seemingly makes his way cross country to Avengers Headquarters.

So did he see something in the Quantam Realm? Did he get a message from Hank or someone else? The thinking is the Q.R. and Scott are going to be integral but does Scott already know that there’s a possible save here? And since he’s not the most science minded of people- how did he find that one out? 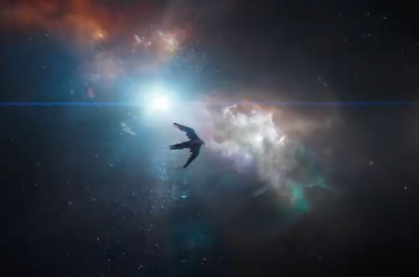 Which leads me to perhaps a bigger question that’s been bugging me… assuming they get everyone back do people remember what happened? Or is a time-line reset going to feel like a total cop-out?

Is the man out of time going to essentially sacrifice himself to fix it?

Tony Stark is lost in space with Nebula wandering around a dying ghost ship. While I still think he’s in the Death Pool I’m not worried about him here. It seems like a perfect opportunity to connect with Carol for the save.

But is Tony going home? He and Nebula together is interesting- they both have a bone to pick (especially Nebula) with dear old Farmer Thanos and a new friend with a whole lot of power could give them the opportunity. I would like him and Steve to see each other eventually but… if they play with time we could still get some closure with them.

Speaking of dear old farmer Thanos- what power does he have left? Does the gauntlet still work? Is he still even a threat? Is Kid Gamora going to continue to screw with his head? Or did Thanos just open the door for a much bigger threat?

Well at least Avengers Endgame isn’t that far away! I just need to stay spoiler free and enjoy speculating and theorizing for the next couple of months and then we’ll have all the answers whether we like them or not…