Fate will Find You: The Starless Sea 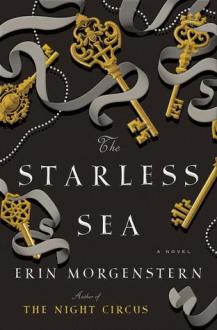 On the one hand I can completely understand why people wouldn’t like this book and don’t like Morgenstern’s writing. There’s a scene in which a character frees the dolls inside a nesting doll: a doll within a doll, a story within a story, within a story, a myth chased through time and space…

A hidden world full of labyrinths and stories and acolytes.

There’s a character into gaming working on a chose your own adventure game within a game- that’s not a huge part but I thought it was important to giving me a better understanding of the Starless Sea.

There’s Zachary Ezra Rawlins who passes up on a mysterious door when he’s a kid but gets a second chance for an adventure when he finds an unknown book that has that very incident in it! There’s pirates, romances happening outside of time, bodies wrapped in stories, bees, keys, cats, a romantic moon and mysterious people dressed up like literary characters.

If you fall into The Starless Sea I think it will happen pretty fast. I find Morgenstern’s writing to have this dreamy quality that’s perfect for the story. It’s frustrating at times sure but I always found it intriguing enough to keep reading. I would want to visit the Starless Sea, play it as a game or watch it as a movie (if you’re listening Netflix!)

Still I think this is another one like The Night Circus that’s going to split people. So if you liked that book give this one a go. If you haven’t read that book The Starless Sea reminded me a bit of Laini Taylor if a bit more out there and Earthbound at the same time. If that makes any sense… 🙂

Recommend: Yes. But with the caveats above to keep in mind!

I hope everyone had a great holiday!