So I was watching Sense and Sensibility the other day remembering with ease how much I hate Marianne Dashwood.

Ugh. She’s seriously the worst of all Jane Austen’s women cause at least Lydia was young, trying to show up her sisters and didn’t have much of a role model in her mother. And sure I mean Marianne’a cardinal sin is even as a teenager I never would have turned my nose up at  I mean Colonel Brandon.

But I think she might be supplanted by an even dumber character and for once it’s not romantic choices that make me roll my eyes! 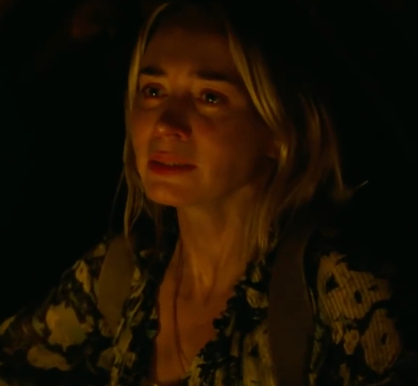 Evelyn Abbott from A Quiet Place 1 & 2

(Spoilers for the 1st movie below.)

So Evelyn and her husband, after losing their youngest son, decide to have another baby during the silent apocalypse in which any time you make noise you get eaten by monsters.

Krasinki’s hot ass beard aside I remember that being the biggest problem for the movie for me. I mean it wasn’t even an accident. They had a coffin like box for the baby to live in. And I just shudder at the thought. And even if you can somehow keep the baby in the coffin quiet well you saw what happened to little kids who just want toys!

Well dad dies at the end of the movie. Probably because he realizes what a bad idea that is but they discover something that can stop the creatures and seemingly keep them safe on their nice big farm.

Watching the first trailer I did see the threads oh, they’re leaving the farm, oh, she still has the baby in a box but for some reason it only recently clicked with me…

And it seems like a spectacularly sucky bad idea to leave the farm to save people. If you’ve ever seen The Walking Dead you know people aren’t worth it. And hell even the good ones are so far round the bend… but that’s another story.

(Why aren’t they using the machine to kill the creature? Ah, need time to set it up? Need someplace to hide? Need a sequel because the first movie made a shit ton of money?)

So this brings me to two predictions about A Quiet Place 2 that I feel so sure about I’d put imaginary money on:

There’s going to be a fake out with the box baby blowing up.

Cash grab and box baby driving my claustrophobic ass to distraction I’m probably going to see this one just to see how dumb Evelyn manages to be and of course if my predictions are right!

But I’m pretty sure she’s going to stay tops on my list of dumbest characters for a good long while!